Another week has disappeared, full of work and full of tiredness. Slowly I'm starting to suspect something like anaemia, because I feel dizzy and light-headed sometimes as well. "When symptoms do appear, common ones include lethargy, weakness, dizzy spells and feeling faint." Ah, that sounds like me! So I should see a doctor, but my doctor is having a holiday. Probably went skiing, just like everybody else this week, it seems... Anyway, I don't feel like seeing another doctor (read: I don't have the energy to find out how, who and where), so in the meantime I try my own recipe: Visiting an a cappella concert to charge my battery ;) It has worked before ;)

Intrmzzo positively surprised me, we really had a great evening yesterday! There'll be a report on my website soon. I'm already working on it, but I'm a bit tired actually... I made some nice pictures yesterday, although it wasn't easy. Dark stage, often black and white clothes, difficult lighting for pictures... but I've got some nice ones! :D

This is a picture which probably won't make it to my website and which shows what happens, when some people are moving, and others are standing still: 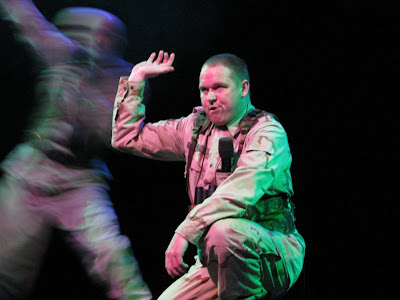 Ok, I'll take a break now and work on the report later today again. But I can already give away my conclusion: Everybody should see Intrmzzo!
at 11:26