This story is bizarre. Nine years ago, my father-in-law sold the Landrover they had owned for years. The Landrover was very typical for my father-in-law, because he had converted it into a mobile home. He was a very handy man who liked to invent things. They always went camping with the Landrover and when Martin and his sister were young, they all four slept in the car. Mom and dad in the back, Martin on the front seats and his sister in a sort of hammock/bunk bed above him. A tent could be attached to the car to provide more living space. There were dozens of other funny and handy things about the car. 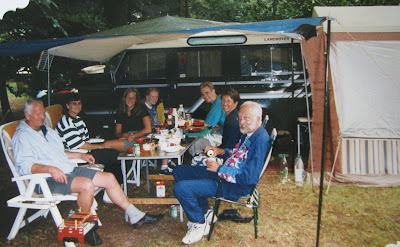 This is during one of our holidays together, in 1999. In the picture Martins mom and dad, my sister, Martins sister, Martin and my parents
He sold the Landrover because he wanted a camper, which would be more comfortable. At some points he was disappointed about the "luxurious" camper, and soon this vehicle was also including typical inventions ;)
Somehow he heard stories about the next owner neglecting "his" Landrover, the axis being broken and the car being demolished. He was sad about it, because he had always been very careful all these years. Maintenance was very important to him.
My father-in-law died in 2004, much to young.
We've always believed the Landrover was demolished, but today my mother-in-law discovered it in our town! She called us, we quickly went to the parking where she'd seen it - and we couldn't believe our eyes. This was really weird, there it was - dads car! A bit older, not so clean and polished as it used to be, but with many of the old attributes. We've been peeping through the windows for at least fifteen minutes. The old cupboards, the small hot plate, the curtains, the rail to attach the tent to the car, etc. Especially Martin recognized many tiny things that all remembered of his father. On the dashboard was an old compass. Martin and his mother have been searching for it a couple of years ago! They never knew it was in the car when they sold it. 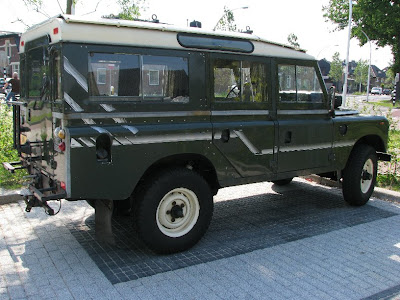 Tadaaaa, here it is!
It's really weird what happened today. I wish my father-in-law could have seen it. He'd be so happy to know the car is still there.


-
Those who didn't know about our Landrover-love will now also understand the choice of car on our wedding day: 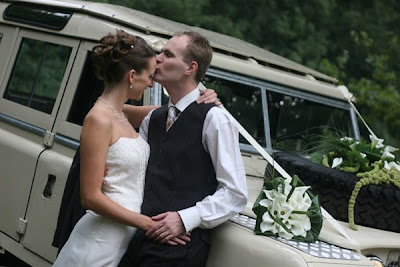