I'm having a little holiday! Because of Queens Day (30. 4), Ascension Day (1. 5) and Liberation Day (5. 5), and because I'm working part-time, I'm having a whole week off. Finally enough time for many things we have to do. Although, enough time? I can never have enough time. But we spend our time very sufficiently so far. On Queens Day we skipped all the celebrations in town and we helped Remco in his new house (it still isn't finished haha). More painting and more wallpapering - but now he finally started the laminate flooring.
Ascension Day we spend in the garage of my mother-in-laws old house. Some people were coming over to have a look at the sailing boat. We had to sell it this month, else we would have a little problem. They liked the boat, bought it and took it immediately. That's one thing less to worry about. On the picture you can see the boat still hanging on the ceiling and you can also see the rest of the things we have to tidy up and move. To be honest: It's already pretty empty on the picture. We'll cope... 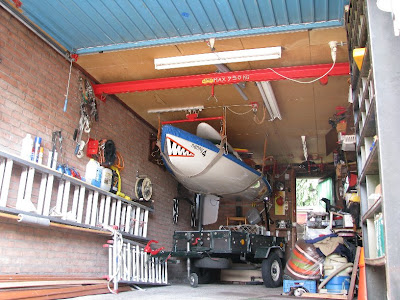 So that was Thursday. On Friday we had time to do some things for the festival and I went to Utrecht, because one of my friends has moved and celebrated a house warming party. On Saturday my sister and her boyfriend visited us, because they hadn't been able to be here at Martins birthday. Because of the beautiful weather, we went out and showed them how to hunt for caches. We found a huge travel bug (read more), which was coming from Hannover. We've never seen a travel bug so big and heavy. It was at least 5 kilos. As it was lying there for 1,5 month already, we decided to take it with us and we will hide it again later, somewhere, so it can continue his journey to the North pole, because that's its goal. We carried it one by one, because it was pretty heavy! Of course, you can also make funny pictures with such a travel bug: 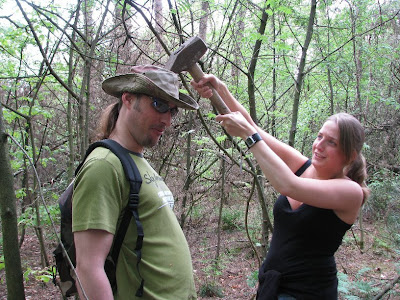 Today I started the day with running, because after quitting volleyball I started running again (Quäl dich fit...). I did 4.5 km within half an hour. Not bad. But not spectacular either ;) I want to train myself to do 10 km within an hour, but I'm not sure if I'll succeed. We'll see.

I planned to do some things for the festival today, but the weather is so good... I want to go out again! I want to read a book in the sun with a cold drink, or make another walk in the forest!
Well, maybe I can make myself to work for an hour or two, and then reward myself with the sun...
Enjoy the day!
at 11:04

Email ThisBlogThis!Share to TwitterShare to FacebookShare to Pinterest
Labels: holiday