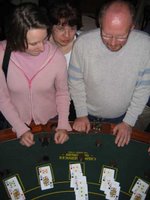 As some of you know, Martin is singing in a choir. This year they are celebrating a jubilee, for the choir was founded in 1980. Yesterday evening there was a party for all choir members + partners. We were invited in De Rustende Jager where we played Black Jack and Roulette! We started with 400 dollar each. Martin and I put our money together so we had 800 dollars to gamble... Everybody started really carefully, betting with 10 or 20 dollars, but during the evening people were losing themselves in the game and betting with hunderds of dollars hahahaha. Probably this was caused by the fact the dollars only had value within these four walls, hahahaha. 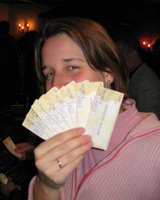 The roulette wasn't really my type of thing, for it's a pure game of chance. Black Jack was more fun, for you really have to think along with the game. And you can win more money with it :D Some people lost all the money they had, but we doubled it! Together we ended up with 1760 dollar :P Such a pity this wasn't real money *g*

At the end of the evening I was so very tired, 'cause I had played a volleyball game that afternoon which had been exhausting! (but we've won it :D) So don't say I've got small eyes on the next picture ;) 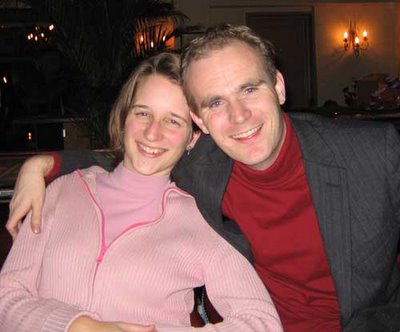 More pictures of this evening can be found at the website of the Evergreenkoor'80 (foto's -> koorfeest).
at 14:45