April 30. is Queensday in the Netherlands. This year, the party would be on Saturday 29. April, because for some reason people can't party on a Sunday ;) I'm not really a Queensday party animal myself, and I'm not really patriotic or whatsoever. But tonight Martin had to perform with his choir and he promised me a spectaculair evening. Martin was busy all afternoon, rehearsing with the choir and soundchecking in the theater. I made a walk through the overcrowded city center and finally found the poffertjes-stand during my third round :P After some delicious poffertjes I got home quickly because it was too cold and unfortunately a bit rainy.
Although I'm not really patriotic, I put on my orange t-shirt, my orange socks, my blue jeans, my red jacket and I felt really Dutch. Together with my parents, Remco and Anne we arrived at the Rabotheater quite early and waited anxiously for the evening to get started. The concert would take place in the big hall and all the (free) tickets were "sold out". 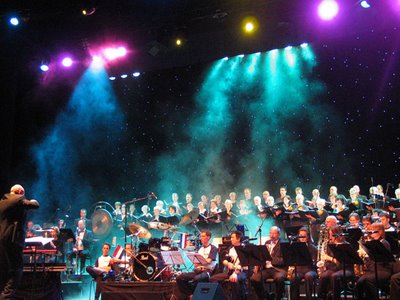 Oh what a night! It was really great to be here and listen to the music. Martin didn't promise us too much.
During the waltzes I schunkelt with my mother ;) and I walked around playing the official Evergreen-Koor '80 photographer (I always enjoy doing that). Remco was making pictures as well and we started a silly competition who could take the best pictures ;) The audience was in a good mood and the conductor was acting silly all the time. E.g. he got a beer and drank it in one draft before continuing the next song. On Queensday you can do anything you like.

Program:
- Also sprach Zarathustra
- Sabeldans
- La Gazza Ladra
- Music was my first love
- Against all odds
- Fortuna imperatrix mundi (from Carmina Burana)
- Some enchanted evening
- This nearly was mine
- Fliegermarsch

More pictures can be found on the website of the Evergreen-Koor '80 soon.
at 11:53