What a weekend. Wow.
It started on Friday (what a surprise!). I came home from work at 2 o'clock and found the Rockhouse Brothers Live CD lying on my doormat. *JUHU*!!!! I packed some final things for the weekend, while the cd was playing in our laptop (for it didn't want to play in my cd-player, ok I think the player is too old...) and waited for Martin to get home. In the meantime I got called and told I wouldn't have the job I applied for... Damn... They had some reasons for it, some I could understand, others not. For instance: They were thinking I was a solist, not a teamplayer. They were missing some team-spirits in me. What?!?!?! Nonsense. Well. I was sad for a little time, but I wasn't going to let this news going to spoil my weekend! We were having a little holiday and we were going to have fun. So I put the worries and thoughts in the back of my mind and at 3 o'clock we drove off.
Martin had quickly put the RHB cd on our MP3 player, so we could hear it in the car (we don't have a cd-player in our car; we can only listen to radio, or connect our mp3-player with an oldfashioned tape to our radio). Rock 'n rolling through some traffic jam we arrived and settled down in our beautiful cottage. Oh, I forgot to tell the reason for this weekend. Martin had the brilliant idea to have a little holiday together, it was his birthday present for me. So we booked a cottage at Center Parcs "Het Heijderbos" two weeks ago. And actually we really needed this. To be away from home, relax and be together without others, without computers and internet and without whatever else can be disturbing when you are at home.

I'll show you some (panorama) pictures of our cottage: 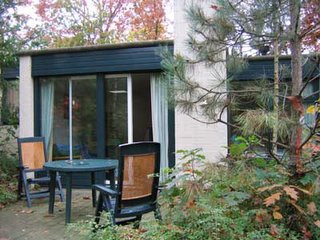 From the outside
And now you all want to know what we did during this weekend. To tell you the truth: not much. We went swimming every day (on Sunday even twice). There is a beautiful swimming pool!! But I'll tell you about it later, because we have made pictures with an underwater camera, and as soon as they are developed I'll scan them and put them online here. Besides the swimming we've been sleeping a lot and we watched some movies on the Canal+ movie channel, cause we don't have that at home ;) And, we visited the Jungle Dome, where you can have a lot of fun when you've got kids, but where you can have as much fun if you haven't. Some pictures: 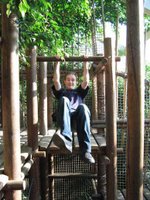 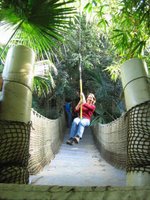 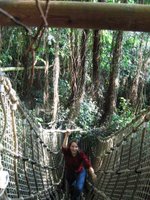 The weather was unbelievable! End of October, but we could walk outside without jackets and swimming in the open air wasn't cold at all. The sun shone and made the pretty autumn colours even prettier. The wind felt like a summer breeze. And with these temperatures, we needed an icecream. Jummy...........!! 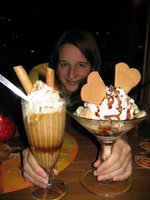 Thank you Martin, for this fantastic weekend. *love ya*