The wedding yesterday was beautiful. Many different people were present, from many different countries with different cultures. We spoke English mostly, but German was also possible for some people, and of course Chinese (but that's just a bit too hard for me *hehe*), especially the Mandarin....
Funny fact: Chris (a German from Schwitzerland) knows the Wise Guys! Well, he didn't ever hear or see them, but he'd heard of them.
Let me show you some pictures: 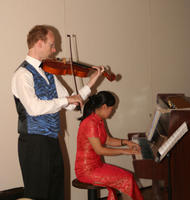 Martin and Mark jamming some improvisation:

The weather was ok. It was cold and windy, but at least it was dry! No rain at all. The ceremony in the cityhall was nice. I had to film the whole thing, which I'm not used to do, but I've seen the results already and can say "hey, I'm not that bad at all". The ceremony was in Dutch and in English.
After the ceremony we had a party with champagne, coffee and tea, later a beautiful cake. There was a delicious buffet in the evening. In the beginning it was a bit odd, for there were so many people I didn't know and I didn't know which language to use. "Hallo, who are you?" "I am some unpronounceble chinese name, nice to meet you" haha ;)
But later on, I had a really really good time.
at 10:39