Festival at the market - Day 1

The Wall is a rock opera presented as a double album by the English rock band Pink Floyd, released in late 1979. More information on wikipedia.

Yesterday this rock opera was performed in Hengelo on a huge stage at the market place. Pink was played by Nikolas Shannon, a fantastic singer from the USA who lives in Germany. He played the character Pink in a very convincing way. The rain helped him though. Depressed, lonely and confused he sat at the edge of the stage, getting really wet and looked even more sad.
A lot of people from Hengelo, some of them we know, played a role as well. The choir, the kids choir and the orchestra were from Hengelo.

The audience got pretty wet as well, but despite the rain, the market place was full of people. During the short dry period of the concert I managed to make a few pictures, like this one: 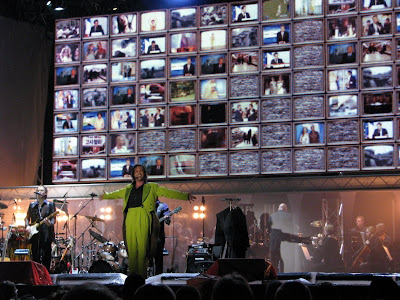